What Is Jacquard Fabric?

August 13, 2021 admin Uncategorized
Here at Vidore, we’re proud of our fine weaves like percale, sateen, and slack-tension. But one that carries a special place in history, as well as in our linenry, is jacquard. But what is jacquard fabric and how did it come about?
The jacquard loom may be one of the most important weaving advances in history. You may not realize it, but the jacquard loom’s technological advances were actually a precursor to early computer hardware development.

Origins of the Weave

The weave of jacquard finds its history in brocade. As far back as 4th century Byzantium, linens and wools were being woven into complex patterns to form beautiful fabrics. With the import of silk weaving around the 6th century, brocade became as luxurious to the touch as it was to the eyes. Byzantine craftsmen began to weave silk into brocades, damasks, and tapestry-like fabrics, suitable for even a king.

By the middle ages, brocades were so expensive that they were only available to the upper nobility and the very rich. In fact, these luxury fabrics often had precious metals and precious and semi-precious gems woven into them. Brocade soon became a symbol of wealth and power, and was favored by monarchs throughout the medieval world.

The nobility’s love affair with brocade continued into the Renaissance age, especially in Italy. Around the 15th century, the Italians began to make a name for themselves as makers of the finest fabrics in all of Europe, and this was in no small part due to the complexity and luxe quality of their silk brocades.

Throughout all of these centuries, brocades were woven by hand on large looms called draw looms. These looms required two people to operate, a weaver and a draw boy. The weaver would call out to the draw boy, letting him know which threads to lift and when, so that the correct colored threads would show through each line of weave.

This was an incredibly labor intensive and slow process. By the end of a full day, a good team of weaver and draw boy could expect to have completed roughly two square inches of finely patterned silk cloth. By the 1700s, several French inventors were hard at work to create a better loom, but one former draw boy had a vision that would change the world forever. 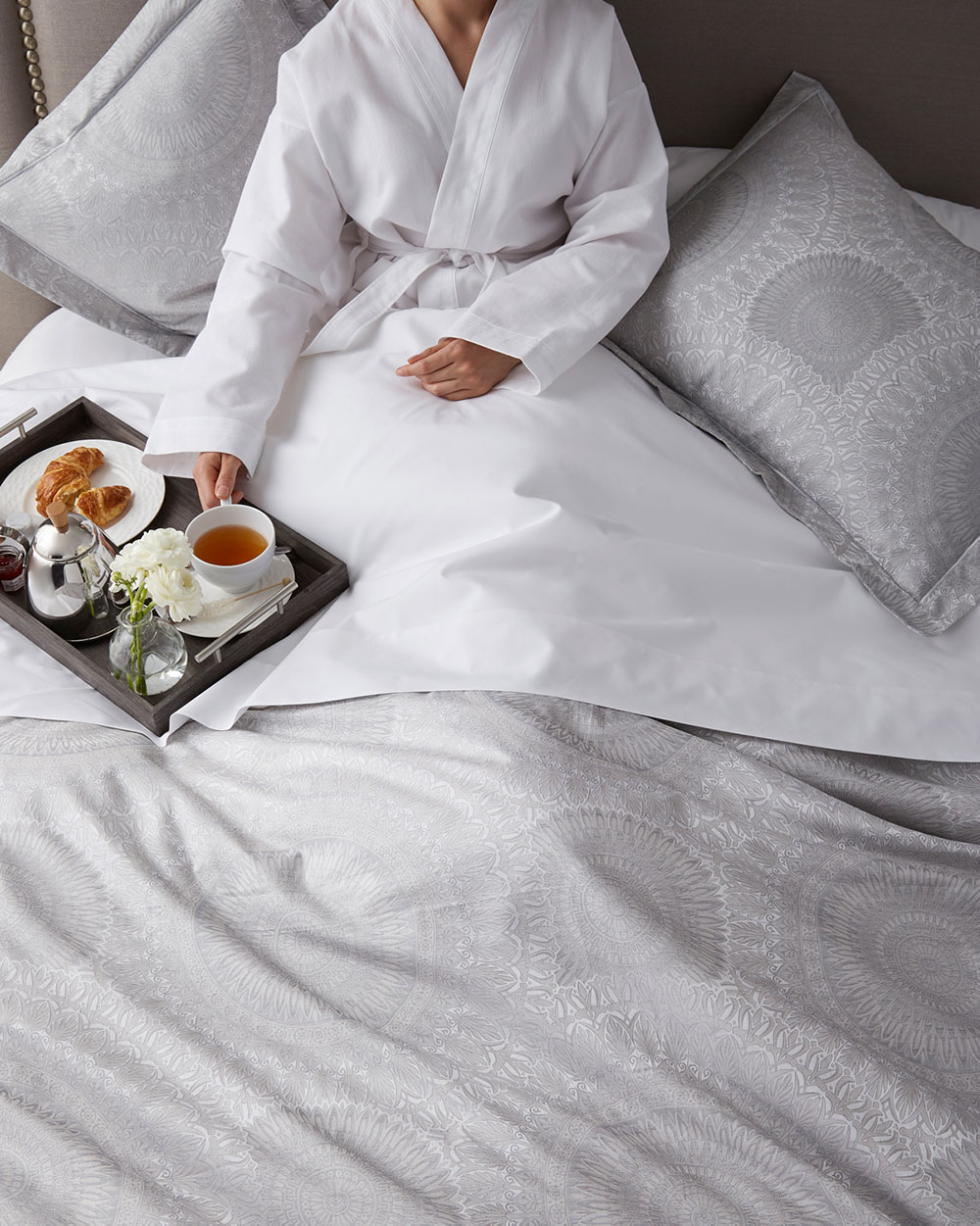 Joseph Marie Jacquard started out as a draw boy. Draw boys were always small children, as they had to be able to climb on top of the loom in order to work. They typically spent 6-8 hours a day working, lifting about 30 pounds of weaving reeds at a time, at the direction of the weaver. This was backbreaking work, often done in horrible conditions, and many draw boys were crippled by the profession. Jacquard knew there had to be a better way. He dedicated his life to finding one.

By the late 1700’s, machines were being developed to handle all sorts of repetitive tasks. They were already being widely used to create simple patterned fabrics, but brocades still required an artist’s touch, since their designs were far more complex. In order to create such a pattern, there would need to be a way to program the machine to change its weave depending on which line of the pattern was being created.

Jacquard created a simple but ingenious solution, using stiff punch cards similar to the reels still seen in player pianos and mechanical music boxes today. In 1801, his initial concept won him the attention of Napoleon himself, who called Jacquard to Paris and commissioned him to perfect his process in the national interest.

The final version, which debuted in 1804, became the world’s first programmable machine. It was later a strong influence for Charles Babbage, credited with creating the world’s first computer, as well as many other uses of punch cards in all sorts of modern applications. The punch cards he created are also thought to be the origin of binary code systems.

More than a century and a half after Monsieur Jacquard first revolutionized the textile industry, in the 1980’s the original electronic jacquard looms were brought to the market. Today, Jacquard’s punch card programming has widely been replaced by modern computer programming, allowing for far greater complexity of design. Yet the fabrics they produce still bear Jacquard’s name, an homage to the amazing advances he dreamed up centuries ago.

Modern jacquard fabrics can be made from a variety of different fibers, from natural cottons and silks, to man-made polyester and polyester cotton blends. What all of them have in common is the method of construction. Generally they are intricate in design, and tend to be stronger and thicker than many other types of weave. The hallmark of jacquard fabrics is that the design is woven into the fabric itself, rather than stamped, printed, or embroidered on top of it. Because of this, some jacquards are even reversible, with the negative of their pattern found on the back.

Technically, any fabric that uses the weaving process originally produced by weavers and loom boys, and then perfected by Joseph Marie Jacquard and those who came after him, is a jacquard fabric. In addition to those fabrics that bear his name, many other familiar weaves are part of this proud history. These include modern brocades, brocatelle, damask fabric, and tapestries. In fact, even our signature matelassé fabrics are woven on jacquard looms.

Generally, you’ll find these fabrics most commonly used in home goods and upholstery, because of their thickness and texturing. They are also seen in the brightly colored and patterned fabrics that make up sarees, as well as textured and patterned coats and formalwear.

Let's get in touch

Give us a call or drop by anytime, we endeavour to answer all enquiries within 24 hours on business days.